Last week, we had Samantha's 18 month appointment.  Overall, it went well.  She's growing like crazy, talking up a storm and is a pretty healthy little girl.

She didn't love getting a shot, but she also got over it really quick.  The nurse was grateful to her for being such an easy patient that day.  She was calm and quiet for the entire exam.  Of course, until we put her on the table and she could play with the fun, crinkly paper.

We decided to try her off of the allergy medicine.  She doesn't seem to act too much differently when she takes it and doesn't, except for the drowsy aspect.  So, our hopes are it stays that way and if something changes, we'll put her back on it.

We also discussed her continued constipation problem.  He is concerned about it and suggested Samantha sees a pediatric GI.  He wrote a referral and they have made an appointment for the end of June.  Later that evening, he called and requested she had some blood work done just to rule out thyroid problems or celiac disease.

Samantha went and had her blood drawn and did AMAZING.  I'll tell you, I was upset by the idea of and terrified to take her.  I figured she would cry, I would have to hold her down and it would just be miserable.  Boy, was I wrong.  She did great, didn't even cry!  Now, she wasn't happy about it.  And she gave some dirty looks, but I'm sure she felt it was justified.

And let me tell you, in the last two weeks, her vocabulary has had another explosion!  It's amazing to watch!

Shortly after we returned from Alabama, things felt a bit off.

Just to rule things out, I took a pregnancy test, fully expecting to see one line come across it and put the notion out of my mind. We certainly hadn't been trying and weren't entirely sure we would try again. Imagine my surprise when within seconds a second line appeared.

I was in disbelief. I took several more tests of several brands. Before I allowed myself to find truth in it, I needed to be sure. Every single one was positive.

I'm excited and surprised to announce that we're building a snow baby. 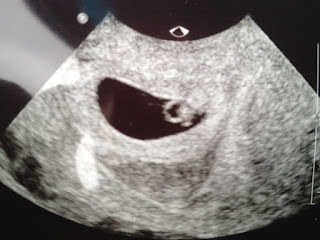 Which makes me 8 weeks and 1 day pregnant. Morning sickness has been horrific and it seems, I so far, will not have the easy breezy pregnancy I had with Kaitlyn and Samantha. After some scary bleeding at 6 weeks, I was sent in for an ultrasound.

An ultrasound at 6 weeks and 2 days showed a baby, right where it should be with a healthy heart rate of 116 bets per minute. It also showed a subchorionic hematoma between the baby and uterine wall. It's relatively small, which is amazing. But, it doesn't mean the bleeding is any less stressful. It does mean I'm not supposed to be lifting or carrying, I should be staying off my feet and drinking a ridiculous amount of water.

We haven't told Kaitlyn yet. My next appointment is next Thursday. As long as all goes well, we will tell her after that.

In the meantime, did you know there are only 223 days left until Christmas? 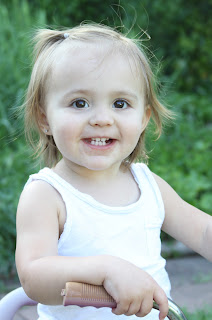 That's right, somehow, Miss Samantha is halfway through her second year!  Um, how did that happen?  Or when?

She has just blossomed over the last couple of weeks.  She talks all the time and says a few 2-3 word groupings.  When she wants to.  Instead of just asking for "ick" (drink) now she'll say Juice or Milk or Water with it.  She says more words than I could begin to count.

Samantha knows all of her body parts, says them, as well as points to them.  Head, hair, eyes, nose, cheek, chin, ear, tongue, teeth, arm, hand, leg, foot, toes, belly button, tummy and elbow.  Which really helps when she falls and gets an owie.  :)

She's in love with songs.  And she knows what ones she wants to sing and will tell you.  She can do all the movements to "Itsy Bitsy Spider", "Wheels on the Bus", and "If You're Happy And You Know It."  She also LOVES books.  Her favorites right now are the Hungry Caterpillar and her Sesame Street Bubbles book.  She likes to have them read to her over, and over and over and over and over again.

She loves to play tag and hide and seek.  She's a terrible hider.  She will just stand there and wait until you uncover her eyes and then crack up laughing.  She's a much better counter.  She'll cover her eyes, say three and then come looking for you.  Of course, you have to hide somewhere obvious because she is easily distracted.  Then again, she doesn't exactly give you a chance to hide.

Samantha loves letters and loves numbers.  I've caught her counting to 3 twice.  But that is it.  And no matter how much I prompt her to do it, she won't.  She recognizes the letters O and E.  Every other letter is a blip.  At least that is what it sounds like she is saying.  When you ask her something, she answers.  When you explain something and end with Ok?  She says ok in seriously the sweetest and cutest voice.  I must record this.  I love it.

Our little diva has no problem telling you what she wants, whether it's bringing my iPhone or iPad to me and insisting on Caooo (Cailou) or Emo (Elmo), or what cup exactly she wants to drink from.  If she doesn't get her way, it starts with a screech and ends with banging her head on anything close by.  We ignore it and it passes fairly quickly.

She really wants to learn how to ride a bike, loves bumping into people, spins around until she is so dizzy she falls, only to stand up and do it again, knows how hysterical she is and does not have a shy bone in her body.

Samantha has started finding nail polish bottles and bringing them to me and pointing her fingers out perfectly.  She prefers them pink.  And she will sit perfectly still for you to paint every single one and even let them dry.  Of course, she won't let you touch her hands if she thinks nail clippers are near by.  She has also started trying to dress herself.  She can get one leg in and then gives up and walks around like that.  And she hates anything in her hair.  She will scream as you try to put in a rubber band and immediately rip out any bows you think are perfect.

She loves getting into everything of Kaitlyn's.  Everything.  She's pretty good with anything that doesn't leave marks.  Kaitlyn still doesn't approve.  Which usually leads to Samantha screaming as Kaitlyn removes her, her crying to me about KaKa, and then Kaitlyn wanting to play in Samantha's room.

Samantha is finally nearly over her first sinus infection.  We're on day 9 of antibiotics.  And she is probably the only kid that stays constipated on them!  Last week we had to repeat her X-ray because of her inability to go more than once a week.  As frustrating it is for us, I can only imagine how rough it is for her.  She also has seasonal allergies, so she's on Zyrtec for now.  If she continues with the sinus infections, she'll follow in big sister's footsteps and have her tonsils removed as well.  Fingers are crossed that if we have to cross that road, we do it at a younger age.

Samantha has also started laughing at the right times when watching TV, cracks up laughing when she watches videos of herself, dances and is SOOO close to jumping, loves to walk everywhere (as long as she gets to pick where), is a great traveler, HATES sleeping anywhere but her bed, is still in a crib (though might be making the change in the next few months if she keeps getting her thighs stuck in it!), wears 12-18 month clothes, says CHEEEESE for the camera with the appropriate cheesy smile, has super adorable chunky legs, big brown eyes and light brown hair.  She begs to play outside, loves dogs and strangers and goes to anyone that will hold her.  If she's in a good mood you'll even get a hug and a kiss.  She's 18 months old and has been to Vegas a few times, Alabama, Mississippi, Texas, New Mexico, Arizona, met Jennette McCurdy and Victoria Justice and won the hearts of so many.