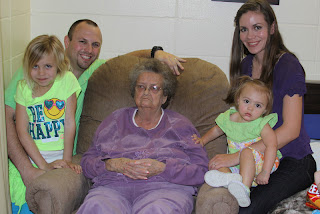 On Tuesday evening, Dusty's grandmother left her Earthly body to be with God and spend eternity in Heaven above. We're incredibly grateful to have had the opportunity to visit in April for her to meet Samantha and visit with Kaitlyn. And now, Matthew has another family member with him. While we would love to physically be there with everyone who is mourning the loss of an amazing person, our thoughts and prayers are with you. Wishing everyone strength, peace and comfort on their journey of grief. She will be forever missed.

Wanna check out what happens when you drive down to Glendale for your oldest daughter to see and meet her absolute favorite celebrity?

I know, I know

I've been a TERRIBLE blogger.  I've totally slacked on updates and seeing as how we've been across the country and back, summer vacation as started, and based on what train of thought you go by, I'm in my second trimester, there's obviously a whole lot to update on.

The problem hasn't been not having anything to say.  I mean, when have *I* not had something to say?  It has had more to do with this little one already showing who's boss by making me a prisoner to toilets and garbage cans everywhere I go.  I've had morning sickness before.  I've had what I thought was bad morning sickness before.  Nothing in the world could have ever prepared me for this though.  Misery is the only word I can think of to describe it.

So, where to begin?

Last night our local chapter of the March of Dimes had a kick off event for one of their big fundraisers in September.  It was an intimate event with about 30 people there who they were requesting to get sponsorships from for an event they plan on raising $200,000 at.  Many of the people there were not aware of the mission of the March of Dimes, which to me is just silly, but I know that if it hadn't of been for our experience, we would be in the same boat.  I was asked to talk about our story, and share how the March of Dimes has affected our lives.

I won't lie and say I wasn't nervous.  I was.  For a variety of reasons.  One being that the above mentioned morning sickness is way worse at night and I was terrified of throwing up.  Another being that I was worried I would cry and watching the fourth season of Lost right now has shown me that crying only makes me puke.  Oh, and throw in there speaking in front of distinguished members of our local community about something so personal without speaking a gazillion words a minute.

I wasn't expecting the crowd that was there.  I was doing ok with "recognizing" people that were there and the important roles in the government until Bethany Crouch walked in.  You know, from Fox 40 news.  The local news we watch every morning.  Then, I was way more nervous for some reason.  But, to say that she is incredibly sweet, genuine and kind would be an understatement.  And, she offered to help with advertising our fundraising event for Matthew's Team next year!  How awesome is that?

I am currently 13 weeks and 2 days pregnant.  We've heard the hearbeat on the doppler.  I'll share video of it soon.  Other than the morning sickness and heartburn, I'm doing good.  I haven't had any spotting or bleeding in nearly two weeks now.  I'm hoping when I go to my appointment on Monday the SCH will have reabsorbed and just be completely gone!  How great would that be?  We're considering going next Saturday to find out what we're having, but haven't decided yet if we will do it then or wait it out a little longer.

Kaitlyn is doing great!  She has officially finished the second grade.  She made the Principal's honor roll for the entire year.  Her school is one of the top performing in the state and considering that their grading requirements are incredibly high and she is advanced in every category they test, we couldn't be prouder of her achievements.  And we're fortunate that she is really a well rounded kid.

Kaitlyn is excited to start cheer on Monday.  She has cheer camp and tryouts that week, then she gets to make the decision if she wants to pursue it or not.  She was super gung-ho and insisting that she had to be a cheerleader this year, until she started seeing all the advertisements around town for the swim team.  Now, she wants to do both.  Considering they are both huge commitments that overlap each other, she has to make a decision on which one to do.

Samantha is doing great.  Her speech has taken off so much.  She talks all the time, no idea where her or Kaitlyn got that from, and her speech is getting much clearer.  She's learned to say the "noises" for a lot of animals.  Right now she will do the noises for cats (my favorite because she squints her eyes and crinkles her nose to do it), dogs, horses, pigs, cows, snakes, ducks, tigers and sometimes surprises us with a few others.  And sometimes she'll surprise us by answering our question of "what does a ______ say?" with utter and complete silence.  We've also been working a lot on letters and numbers.  She'll repeat the ABCs after me and recognizes a few letters on her own, like A, B, O and R.  And her favorite number is 3.  She recognizes it and points it out everywhere.  She's pretty darn bright.  She stacks blocks 5-6 high, she cuddles her baby and of course, tries to climb on absolutely everything.  And when she gets told no, she'll listen.  Of course, she'll throw herself on the ground in a tantrum of screaming and fake crying, but she'll listen.

Samantha had her pediatric GI appointment today.  It went ok.  There don't seem to be any structural abnormalities or anything suspicious in her blood work.  She has lost 3 ounces in a month (which means she's dropped from 45% to 25% in weight) instead of gaining.  And she has a lot of stool in there still.  The doctor believes it's compacted and gave us a couple of options.  We could try the magnesium citrate again.  This would be our fourth time.  It hasn't worked in any of the previous three attempts.  Like, not even a tiny bit.  All it does is create a day of tears, frustration and a couple of little runny diapers.  I'm sure it creates a tummy ache for the little one as well.  And if it doesn't work, we would go to option two.  Option 2 is to put her under general anesthesia and after she's asleep for them to go in and remove the compacted stool.  The goal is that once the compacted stool is removed, the stool softeners will be able to keep her regular and her bowels nice and clear in the future.  We opted to go for option 2.  Since the procedure won't take place at our normal hospital, we have to wait for insurance authorization to go through.  Depending on when that happens, she'll either go in a week from tomorrow or the following Friday.

On Memorial Day, Dusty and I took our poorly packed luggage, loaded Samantha into the truck Dusty drives at work, hooked up to a 34' trailer, and after leaving Kaitlyn with my mom, took off for a drive across the country.  In about 6 days, we arrived in Washington DC.  Kaitlyn flew out with my mom and arrived the same day we did.  We spent 9 days in DC. We varied the days up between work events, site seeing and me trying not to throw up around the clock.  I did not have a good time.  Then, we let Kaitlyn go with my mom and the three of us started our journey back.  Kaitlyn and Grandma took a detour on the way home and stopped in Illinois to visit with Grandma's side of the family.  Kaitlyn had a blast visiting with her aunts and cousins, and we were able to stop for about half a day and join her.

By the 5th day of driving, we were about 15 hours away from home, 900 miles or so, and decided that we didn't want to wake up and get in that truck to drive anywhere for another day.  Considering that Samantha kicked at me when I tried to put her in the car, I think she agreed.  So, we traveled from Wyoming to Sacramento all in one day.  To me, it was worth it.  We spent the entire next day not leaving the couch unless we had to.  And, we were glad to get back in time for Father's Day!

That's a quick run down of life over here for now.  I'm sure it's going to continue to be crazy, but I'm looking forward to a little bit of resting this summer!