After a pregnancy filled with lots of monitoring, testing and weekly p17 shots, at 39 weeks and 2 days, on November 9, 2010, our third child and second daughter was born.

Our cesarean was scheduled for 2:00 PM on Tuesday, November 9.  We had to be there at noon to get everything all set up.

On the way to the hospital, we stopped at McDonald's for Kaitlyn and Dusty to get some food.  I wasn't allowed anything beginning midnight the night prior and I was starving!

We parked and got to labor and delivery at 11:57 AM.  Only to be told there were no available beds.  At this point I should have tried to reschedule lol.  We were put in triage at about 12:30.  I was put on the monitors, did all of my health and pregnancy history, got my IV put in (by a student, who did get it in, but it was really painful!), blood taken, gown and all set up for surgery. 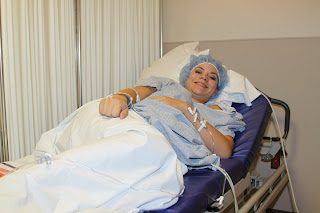 My Doctor came in around 1:15 and we found out that the OR was really behind.  They had just started the noon section.  I was not thrilled to hear this.  At all.  My nurse was fantastic and soon I met Dr. Carouso who would do my spinal.  My doctor wasn't thrilled about the delay and went to throw a fit about it.  We ended up getting back to the OR around 2:45.  The nurse teased me since I had a steady contraction pattern the entire time we were there.  My contractions were never less than 3 minutes apart, I told her they had been that way for over a week and it was so frustrating to have them so close, so regular and know they aren't doing anything.

Dusty had to wait in the hall in his white jumpsuit, shoe covers, hair net and mask while we got set up.  The anesthesiologist was amazing.  My spinal barely hurt going in and provided an amazing level of pain relief.  It was so different than my cesarean with Matthew.  Once it was in, I was laid on the table, hooked up to a pulse ox machine, blood pressure cuff and given oxygen to help make sure the baby had enough air.  My cathader was placed and I was prepped for surgery.  I had the drapes put up all around me and then Dusty was allowed in. 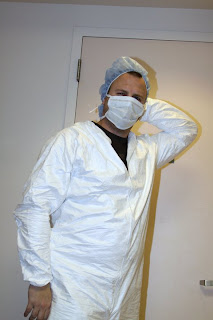 Dusty was great!  He was by my head the entire time and kept making sure I was feeling ok and not in pain or discomfort.  Samantha was wedged in there and wedged in high.  She was head down, but Dr. Zielinsky had to push down on my chest to get her to finally get out.  He kept going on and on about what a big baby she was and how happy he was that we were getting this outcome.  The doctor that assisted him had also assisted with Matthew's birth.  They went over my history since then and they were both really happy for us. 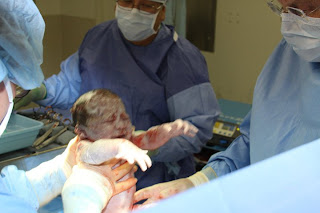 Samantha was finally out!  Dusty got some great pictures, which I appreciate and cherish already.  She wasn't crying when she was first born, they took her to the warmer, rubbed her back and she started to scream. 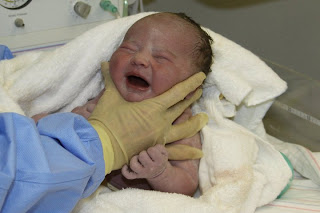 The pediatric nurse then weighed her, cleaned her up a little bit and got her footprints done. 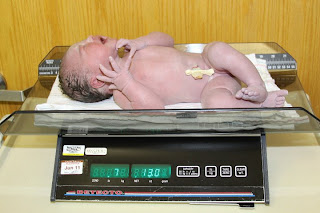 Dusty was then given the baby to hold, bring to me and cuddle while they finished closing me up.  Dr. Zielinksy decided that my muscles were too stretched from this pregnancy and the last.  He decided to give me a mini tummy-tuck and fix up my scar from the last cesarean.  He was incredibly thorough. 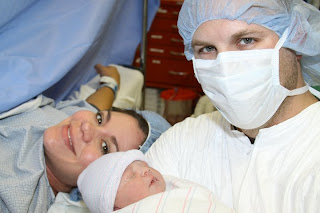 When it came time to get me on a regular bed and in recovery, Dusty took Samantha to meet her family.  She met Kaitlyn, grandparents, aunts and uncles and got to be held by everyone while I was set up in recovery. 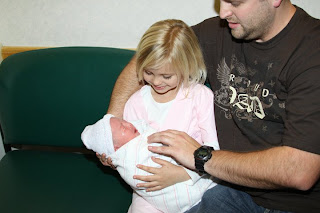 Once I was good to go, Dusty brought her to me and I got to hold her!  We did skin to skin therapy for a little bit before it was time for her to try and nurse.  She took to nursing like a champ.  She did fantastic.

It took a few hours before we went to our room.  The hospital was incredibly full and we didn't get a private room.  While we were transitioning, Samantha went to the nursery where she was given her hearing test, bathed and weighed.  We finally got her back after a couple of hours and then started trying to rest.

My nurse was confused and thought we delivered Monday.  So, she got me up walking within 12 hours of surgery time.  The catheder was out in less than 24 hours.  I was walking the halls

Unfortunately, we had the roommates from hell.  They were young (which I don't have a problem with), their baby cried ALL the time, she was whiny and expected the nurses to do everything for her, their guests were ghetto and loud and we weren't able to sleep day or night, which had nothing to do with our own baby.  It was really frustrating.

By yesterday, we had enough.  One of their guests was coughing like crazy.  Not sure if she was a smoker or sick, but we weren't risking it any longer and decided we had to go.  By 11, we were walking the halls to try and get some peace and quiet.  Really, it was that bad.  I told the nurse we were just miserable.  By 12, they had decided to move us.  They were opening up the old cardiac care department and moving some patients down there to ease up some space since they were really over packed.

At midnight, she was weighed and 7 lbs and 6 ounces, she had lost 7% of her body weight.  Which meant that she had to have a bilirubin test in the morning to check her jaundice levels.  Everything came back fine, so I got to have all 18 staples removed and us ready to get going home. 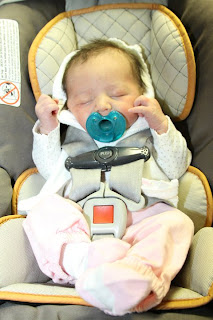 And here we are!  About 72 hours after delivery, we're all home together, resting and relaxing.